You can bet the Mad Scientist Miles Husband (MSMH) hates to use actual money to buy plane tickets.

When there isn’t a great miles deal, he has been known to use the “Hidden City” technique.

Simply, this means booking a longer flight than your planned destination. You get off the plane during a layover in your chosen city.

Why would you do that?

Because, believe it or not, that longer flight just might be cheaper than if you were to book a flight directly into your planned destination.

It can be kind of complicated to figure this out.  Not to worry, there’s a website for that!

A young man named Aktarer Zaman started it to help out folks whose brains can’t wrap weed through all the gobbly gook.  That would include me, by the way, if I didn’t have MSMH.

How good is this trick?

United Airlines and Orbitz have gone to legal war trying to shut down the site.

It’s perfectly legal, they just don’t like this brainiac kid spoiling their fun.

Here’s more on the lawsuit.

Score Round One for Aktarer, but it’s not over yet.  He’s got a GoFundMe campaign going to help pay his legal fees against the big boys.

So, try it out. Go to Skiplagged.com and see what kind of fares you can come up with compared to using the airline sites and Orbitz.

One thing Wifey, here, has to point out–Hidden City technique, getting off the flight before your final destination, obviously means you have to bring carry on luggage only. But really, how many pairs of shoes do you need to pack anyway? 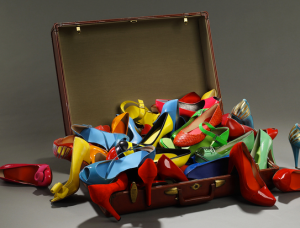 Think of it this way–you can reward yourself with a new pair of shoes with the money you save when you get back home!